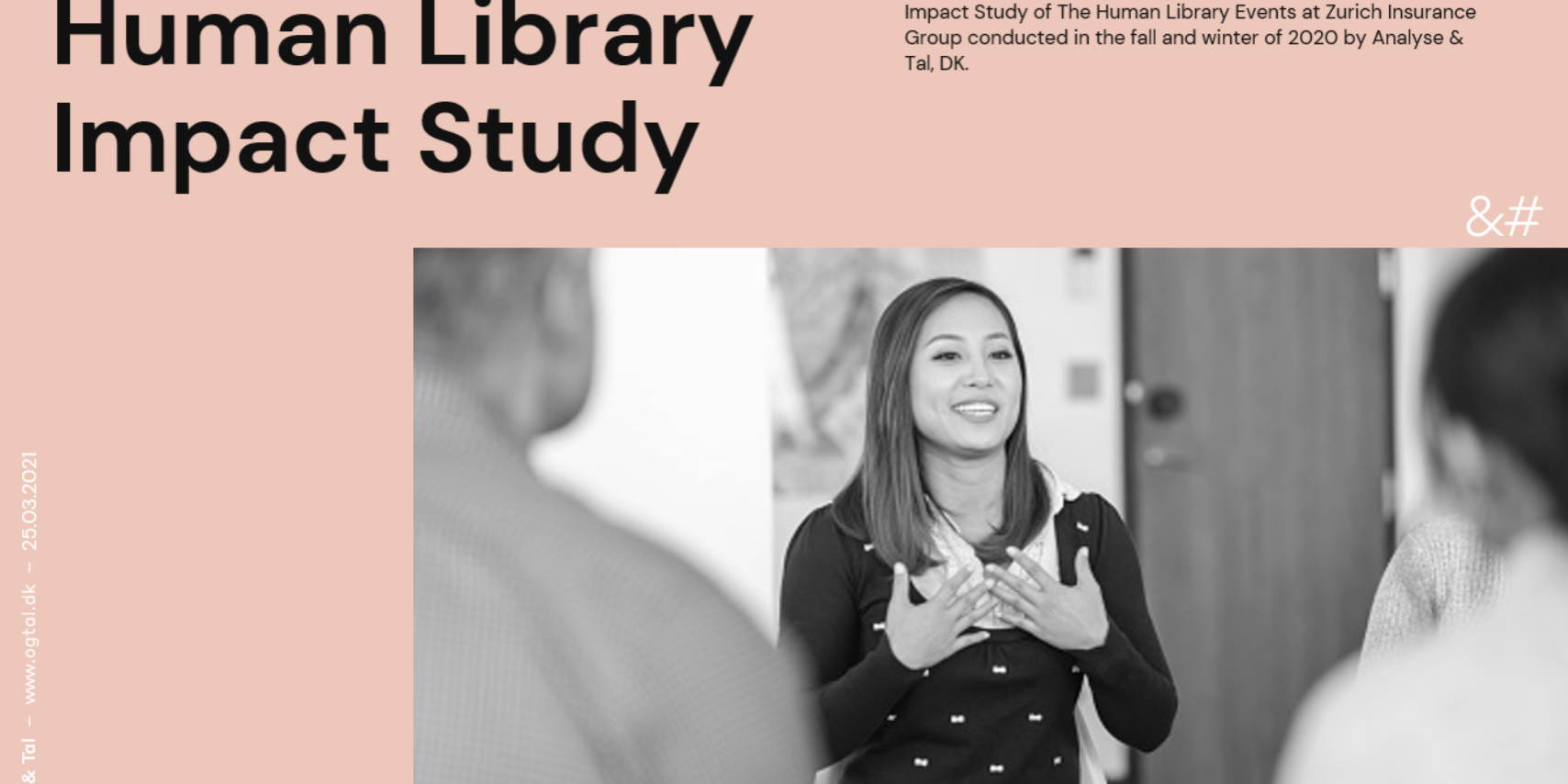 New study on the impact of the Human Library

The first impact study of the Human Library online format shows that Human Library events help Readers understand a broader scope of diversity and recognize that inclusion is more than acceptance – it requires action.

Danish research consultancy, Analyse & Tal, was commissioned by Z Zurich Foundation to conduct a qualitative study to investigate the impact of the Human Library. The study was based on three virtual events the HLO hosted for 200 Zurich Insurance Group employees from different regions of the world. A group of participants who took part as Readers in September 2020 were interviewed before the events and again three months later.

Jakob Kristensen, Analyst at Analyse & Tal says the findings indicate high satisfaction and significant short-term impact among the participants, “We focused on the intensity of people’s experiences. I was surprised to see that so many participants were able to recall vivid details of the event, as well as the recurring thoughts they had about their experiences in the months that followed. The level of detail and excitement they could recount was impressive. Based on our experience, we would label this as a significant impact.”

Readers began reflecting on own biases

Readers found the format of the event to be both surprising and refreshing. It was frequently mentioned that being faced with another human being inspired them to reflect on their own biases and resulted in an increased sensitivity towards the diversity that exists beyond physical appearance.

After the event, most Readers learned to identify stigmatized groups that are typically less visible and not included in their previous DEI experiences in the workplace. They also articulated a realization that inclusion goes further than acceptance or non-discrimination – it requires conscious action. Some mentioned they had changed their behavior based on their experiences at the event. This result is exciting, as it demonstrates medium-term impact which spreads further than the individual.

“There are definitely proven impacts that were supported by a whole host of verbal comments and a clear desire to repeat the experiment.” says Mark Heasman, Head of Activism at Z Zurich Foundation.

On Wednesday 24 March, Diversity Partners from all over the world came together to learn about the outcome of the impact study. After Jakob presented the results, there was an animated discussion between our Partners about how they can embed the Human Library into their organizations existing DEI efforts. There was even talk of collaboration between different friends of the Human Library and so we are helping create new networks and forums to share learnings and outcomes.

“Social equity is an important pillar for Z Zurich Foundation and if we’re going to change things within that space, we need to break down stereotypes,” says Mark Heasman, “The Human Library fits in really well with what we’re trying to achieve, and we see a lot of value in the platform as a tool to engage our employees.”

Nadia Younes, Global Head of Employee Experience, Diversity and Wellbeing at Zurich Insurance Group, says, “We want to implement the Human Library into broader development programs and make it a more systemic approach to learning, particularly among our leaders. We want to weave this into how we operate as an organization in the long term rather than just a one-time event.”

This small impact study has provided some exciting evidence that the Human Library has a lasting positive impact on those who attend our events, and we are thrilled to see it inspire our Partners to strengthen their commitment to diversity, equity and inclusion. To aid them in this process, we plan to build upon Analyse & Tal’s research to determine the extent of our impact in the long-term.

From staff to reader to book

One very concrete outcome from the sessions is the case of Ray Chaaya, Employee Experience & Culture Lead for Zurich in Canada. Ray shared his journey from becoming a reader through the Zurich sessions to signing up as a book for the library.

“When Z Zurich Foundation sent out the invitation, I was on vacation and quickly skimmed the invite, thought it sounded intriguing and hit okay. What I didn’t realise at the time was that the event was actually taking place at 1:00 a.m. my time so when the day came I was pretty bummed out that I had to wake up at 1:00 a.m. to do this, but I set up my alarm, I sat in front of my computer and the next 2hrs flew by. It was 3am and I couldn’t go back to bed. My mind was buzzing from the impact I had just experienced from talking to these Books.

The next morning I went online and signed up to become a Book.

I thought this was an interesting way of doing what I already do in an organized, structured, virtual and now global format where I can reach more people and hopefully make a bigger impact”.

To learn more about the impact study contact the Human Library secretariat or Z Zurich Foundation.