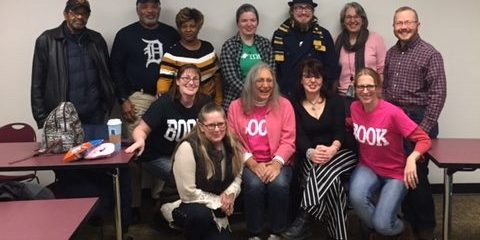 Our Human Library Book of the Month is a series of portraits of our books and librarians created with the purpose of offering our readers a chance to understand the diversity and variety within our bookshelves around the world. It also provides unique insights into the motivations and values of being a book and volunteering for our organization.

Ten years ago, librarian Allison McFadden-Keesling introduced the Human Library at Oakland Community College, OCC, in Waterford Michigan. At a Human Library event, community members are the “books” and work to create dialogue and understanding between people by sharing their experiences of prejudice or discrimination in an open conversation.

When listening to the human books’ story, readers are encouraged to ask questions that they wouldn’t in another social setting. After reading an article in a London paper, Allison decided to bring the Human Library to her college.  Half a year later she had recruited the books that were essential to the first event.

It is a lot of work setting up an event, especially the first few times, but, she says, “the payoff is enormous.”

The readers benefit from hearing another person’s story and hopefully gain a better understanding of their own prejudices. It’s a safe space to hear another perspective and ask questions.

Morphed into its own thing 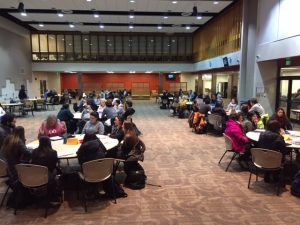 Readers with their Human Library books at Oakland Community College in Waterford, Michigan.

In her opinion, The Human Library makes a difference. Not just for the readers who get a chance to learn about our diversity, but also for the books who build their own community and become close friends in the process.

“It has morphed into its own thing,” Allison says. “Every time we have a Human Library, it’s like a family reunion! The books are excited to see one another and learn what’s new in each other’s lives.”

Initially it was difficult to find people interested in being a human book.

“At our first Human Library, we had 8-10 human books; now we have as many as 30-35 people vetted and interested in participating as human books.”

She constantly works to add to the book collection.  After attending a Human Library as a reader, individuals often ask if they can share their story at future Human Libraries.

“The more events we hosted, the more people were interested in being readers as well as books.”

Stepping out of your comfort zone

“Shyness can be a big issue,” Allison McFadden-Keesling explains. “Some readers are shy or hesitant at first because they don’t feel comfortable having a conversation with strangers.”

Learning how to engage in a conversation is another benefit of the Human Library. At a recent Human Library at OCC, a student left the queue to take out a book. When asked, the student said he was shy and didn’t feel comfortable talking with a stranger.  Allison reassured him and promised to take him to a human book that would do most of the talking, in this case the Russian Jewish book. They talked with ease and continued their conversation well past the close of the event.

The popularity of the Human Library event has grown beyond her expectations. Last fall, there were more than 160 readers in attendance. Allison now tries to invite specific classes and stagger their arrival time to make sure all readers get to read the books. OCC now offers two to three Human Libraries each academic year.

“After my family, my passion is the Human Library. This is my attempt at making a small difference in the world. One person can make a difference but I recognize that I’m in the cheap seats. The books are the ones in the front bravely sharing their personal stories.”

Allison describes herself as “inclusive by nature” and thinks the library personifies what society should reflect: inclusiveness, and the ability to meet other people with curiosity. “I have seen it work instantaneously; it is non-threatening, non-political, there is no set agenda, just polite conversation. It is truly inclusive. Maybe you don’t agree with everybody there, but you get a chance to talk to them.”

BOOK OF THE MONTH: Black Orphan in Illinois
10/12/2020
Search
Recent Articles
FROM OUR GALLERY