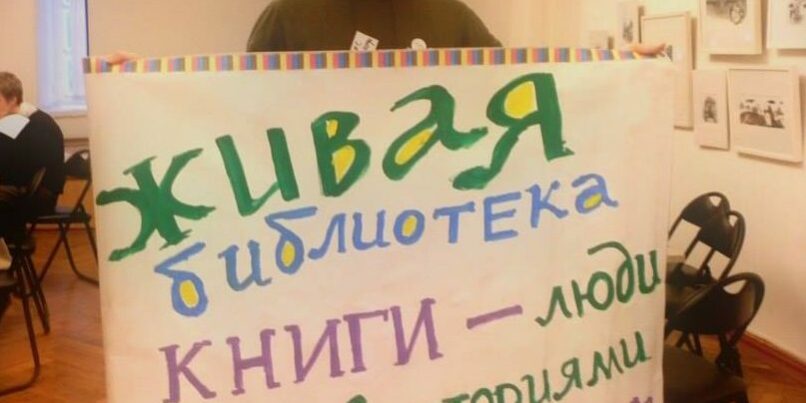 The Human Library in St. Petersburg has had a nice long run of events until now.

All of the previous nine Human Library events held so far in the city, have taken place without any objections or attempts at intervention from the Russian authorities.

Everything was going according to plans for the upcoming event on November 20th at Lenin Library located Voskova str. 2 in Saint Petersburg.

“All of a sudden there was a problem with the list of topics we wanted to publish”, says one of the responsible Human Library organizers in St. Petersburg, Mr. Boris Romanov.

Homosexuals not wanted on the bookshelf

On October 25th around 3:45 pm Mr. Romanov received word from the administration of the Lenin Library that there was “hesitations” about some of the titles. More concretely the message was;

“We have looked through your list of books with our administration and we have some reservations regarding four of your books: the sex worker, the person without a child, the ex-prisoner and the homosexual. We would be very grateful if you could accept our intolerance regarding this issue and make sure these books are not present at the event.”

Margaret Alex, the coordinator of educational programmes at Lenin Library, stated on the phone that these restrictions originated not from the library, but from the administration of the Petrograd district.

A proposal put forward from Mr. Romanov to organize a meeting with an administration’s representative to dispel the fears regarding the mentioned identities was rejected due to lack of time.

The most recent Human Library event was held in September at a state-owned space in the Art and Music Centre of the Mayakovskiy Library.
The Human Library in Saint Petersburg has already been held for 9 times and there were no conflicts between these identities and Readers.

“The behavior of the Lenin Library is simply startling for our civil initiative. We need answer to why adults of the full legal age are not allowed to talk to different people. The Human Library has an age restriction of 18 years.” says Boris Romanov.

The civil initiative ‘The Human Library in Saint Petersburg’ insists on an explanation from the Petrograd district administration, why people representing identities of a sex worker, childfree, ex-prisoner and homosexuals may not take part in events at the Lenin Library.

Will not allow for the Human Library to be censored

Human Library founder Ronni Abergel has heard many examples over the years, but this one is more blatantly obvious that many attempts in the past.

“It used to be that they would just say not to hosting us when they learned what content we wanted to publish. Now they are more open and say yes, if only you will leave out the topics we dont like to talk about. But then the whole idea of the Human Library is gone. Now it would seem that there are certain institutions in St. Petersburg and in Russia that are simply not “tolerant enough” to host the Human Library”, says Ronni Abergel.

It is uncertain where the scheduled event will take place or if it will be rescheduled at a different location.