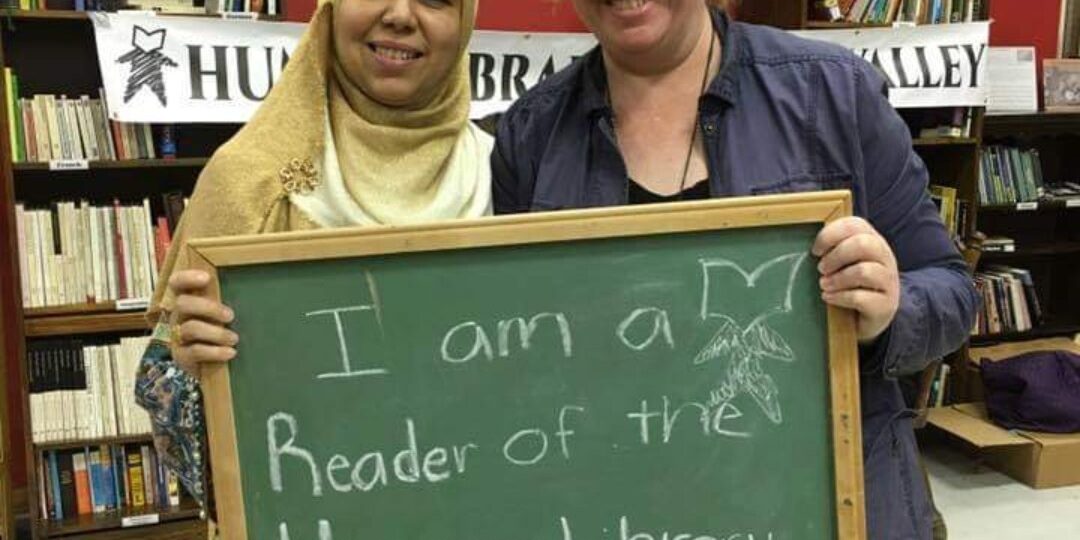 Book of the month: Muslim Woman

Our Human Library Book of the Month is a series of portraits of our books. The portraits are created to offer our readers a chance to understand the diversity and variety on our bookshelves around the world. It also provides unique insights into the motivations and values of being a book and volunteering for our organization.

Two grandparents came in to borrow Saima as an open book with her title “Liberated Muslim Woman” in The Human Library.

The grandfather was neutral in his attitude, but the grandmother looked a bit upset. She wanted to know what Saima as a Muslim thought about women being educated, homosexuals and so on.

Instead of finding Irreconcilable differences, the grandmother discovered the similarities between Saima and herself.

“We talked about our families, and how much we care about them: How important family is to us. We found out, how much we have in common. The grandmother was a relation to one of the other books in The Human Library, and I told her how much I cared about this person.”

“Something magical happened during that conversation, and we were both very emotional. We kind of saw the common love,” says Saima.

The grandmother had tears in her eyes, and maybe she left with a new understanding of what kind of values and approach to life a liberated Muslim woman has. 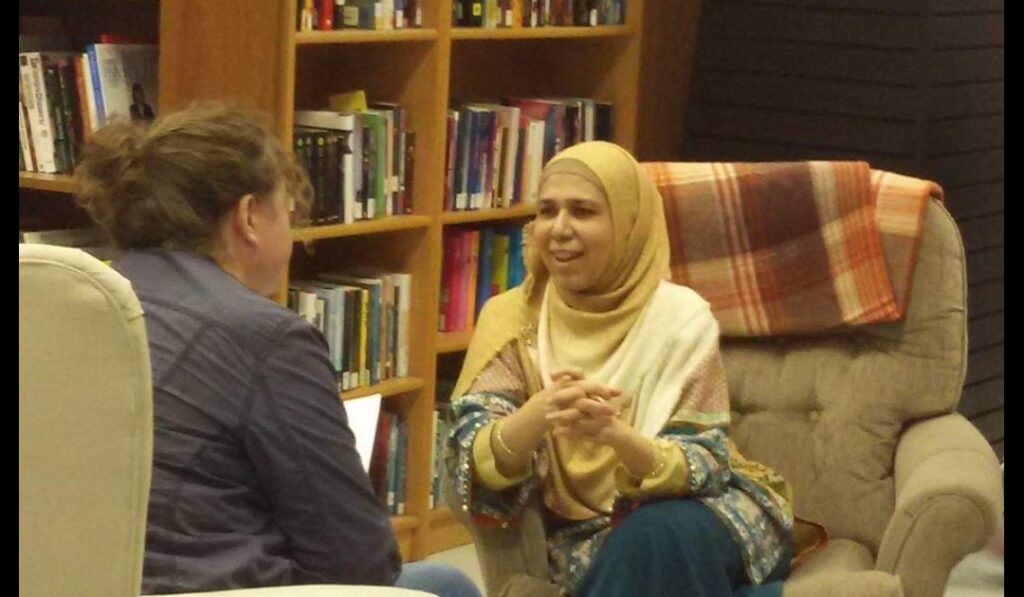 Saima in talks with her reader

Saima is 49-years-old and she is part of the book collection in the Human Librarys book depot in Fox Valley,IL.

“I am very passionate about breaking down stereotypes, and I think it is my calling to be part of an initiative like The Human Library,” Saima says.

Saima has been an open book to curious readers for two years and has been published more than 20 times.

People come to The Human Library with misconceptions. For example, that Islam is a strict and a very aggressive religion. Saima shares her story with them.

She has lived in the US for the past 23 years, but was born in Pakistan and partially grew up in Dubai where she spent 16 years, from the age of six.

“I went to a catholic school in Dubai and grew up with catholic friends and friends from various other faiths. I really appreciate the different, rich cultural backgrounds that I have experienced in my life,” she says.

Reaching the hearts of people

Saima only became a devout Muslim, when she was having her first child, who is almost 20 years old now.

“I realized it was important for me to learn my own faith in order to teach it to my child. Learning my faith, Islam, taught me to be a caring person for humanity. What I learnt in Islam was opposite to what the world was being told about my faith.”

When The Human Library started in Fox Valley, Islamic Centre of Naperville (ICN) was asked: Could they provide a book for the library? And Saima volunteered. “Human Library is a perfect platform for me to reach the hearts of people and inform them about the true teachings of Islam, which in reality is a very peaceful religion.”

Learning from readers and books

As an open book you meet a lot of readers and answer many questions, but you also spend time with the other books on the bookshelf and so while waiting for the next reader and in breaks, books informally read each other.

“It has been an eye-opening experience for me. It has been so positive to read the other books, too,” she says.

Living in a mainly Caucasian suburb of Chicago, Saima has not been exposed to many other minorities in the community. But through The Human Library she has.

“I thought I was open-minded and open-hearted, but I realized there are so many groups I did not know much about. The Human Library has given me a chance to get to know other marginalized minorities on a very personal level.”

A safe environment to challenge stereotypes

The learnings for Saima and the many different meetings with readers and books over the past two years, has taught her more than she expected, about others and about herself.

“It is a safe environment to challenge the stereotypes, and I really want to continue to be a part of it.”

“Our diversity is a great asset and understanding another human being on a deep personal level is important. And if I can help bring hearts closer together through our conversations, then I would consider myself successful as a Human Library Book” Saima says.

For an opportunity to borrow Saima and ask questions about Islam and life in America, visit the Human Library Fox Valley website to stay updated on local activities.

Book of the month: Eating Disorder
29/06/2021
Search
Recent Articles
FROM OUR GALLERY